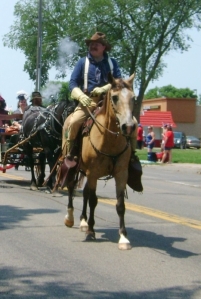 Theodore Roosevelt was Assistant Secretary of the Navy, reporting to the Secretary of the Navy when the Spanish American war was declared.  In his role. he had often overstepped his role and took command of the Navy  because his boss, John Davis Long was Ill and unable to serve his duties.   Roosevelt had a very different perspective on preparedness and pushed his beliefs on Long, who had a more reserved approach.  This led to Long creating systems to try and control Roosevelt from broaching his authority.

As part of a display of the United States support of the Cuban people who were at war with Spain, the United States sent the U.S.S. Maine, an armored cruiser battleship to sit on display in support of the Cuban people.   The sinking of the U.S.S. Maine in Havana Harbor on February 15 1898 ultimately lead to the declaration of war and a change in personal direction for Roosevelt.   He and his friend Leonard Wood attempted to enlist in the regular army but were turned away.  Then Congress decided to assemble a volunteer unit made up of  cowboys, sharp shooters and the like from Arizona, New Mexico, Oklahoma and Texas.  Later, the number was increased to allow a few of the upper crust from the east who also wanted to fight.

Roosevelt was offered leadership of one the on the Calvary Units, but declined because he felt (and knew) his friend Wood had the experience necessary to lead the men to increase their chance for success.   Roosevelt knew that while he had led many people in different roles in his life (Civil service commission, Rancher, Police Commissioner) he had not led someone into war, and that he would better serve his men by having someone in charge with experience.   Ultimately, Roosevelt’s example on the field, leading the charge first up Kettle Hill and then San Juan Hill gave his men the ideal of leadership.  But Roosevelt’s decision to first learn from Wood probably saved many, many lives.