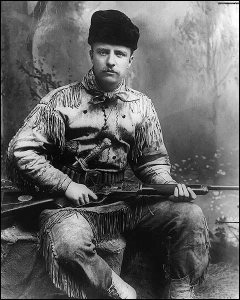 Only Tiffany would do for TR

I had a client send me an article of the 1st public reference of the word “dandy” and the writer claimed it was about Theodore Roosevelt.  You can see by this photo why the guide who was hired to take him on the Bison hunt in Dakota Territory called him a “dandy” and why he had second thoughts about the whole thing when this man got off the train.  The high voiced spectacled man insisted he wanted to hunt on horseback and the guide informed him that no “greenhorn” from the east was going to use any of his horses – Roosevelt would ride in a buckboard.  It was only after Roosevelt offered to pay $50 for one of the man’s horses that he was able to get what he wanted – and show the man he could actually ride.

Roosevelt first went to the badlands to hunt that bison and he had his clothing, knife and gun made to his specifications.  Of course, he had the local photographer take his photo in studio to show the amazing outfit he had assembled – The buckskin shirt you see on him here was made for him for the outlandish price of $100 – a steep amount indeed (when you consider he offered to buy a horse for $50).  But when you add the silver and gold gun with ivory handles and the knife you see tucked in his buck skin pants, his investment just to look good for his bison hunt is impressive.  His bowie knife was made by his friends at Tiffany’s – who would supply him for much of his life.  In fact, it was Tiffany who funded special rifles for the Rough Riders at Roosevelt’s request.

I was fortunate to come upon a reproduction of his knife which I take in a glass case to many of the events at which I speak.  The side you see here pictures Davy Crocket, on the flip side is his name spelled out in cursive.  The blade on the Davy side features bears, while the opposite has a scenic deer motif.  The knife is silver and heavy and larger than life, just like its owner was!

Only the best for “Teddy”.

He killed a cougar once with only a knife:-

Keystone Ranch, Colo., Jan. 14th, 1901 –
“Soon we saw the lion in a treetop, with two of the dogs so high up among the branches that he was striking at them. He was more afraid of us than of the dogs, and as soon as he saw us he took a great flying leap and was off, the pack close behind. In a few hundred yards they had him up another tree. This time, after a couple of hundred yards, the dogs caught him, and a great fight followed. They could have killed him by themselves, but he bit or clawed four of them, and for fear he might kill one I ran in and stabbed him behind the shoulder, thrusting the knife right into his heart. I have always wished to kill a cougar as I did this one, with dogs and the knife.”